Alissa Cohen astounds many people when they find out that this bubbly, vivacious raw foods author and teacher is actually 40 years old instead of 20. With her infectious laugh and warm personality, Alissa looks and feels better today than she did as a teenager. Alissa Cohen is the best-selling author of Living on Live Food. She's appeared on the Today Show, the Tyra Banks Show and in countless magazines sharing her passion for raw and living foods.

Alissa's book is just one of the many ways she shares the amazing secret of staying young and healthy by eating raw foods. In 2008, Alissa and her husband opened Grezzo, a gourmet raw and living foods restaurant in Boston's historic North End. It's been such a success that she's opening a second Grezzo restaurant in Massachusetts later this year. She also founded a line of clothing, Live Juicy Eat Raw, and runs a multimedia website for raw food enthusiasts, complete with a free message board and products store to help people live on raw, living foods.

In between opening a new restaurant and preparing for raw food teacher certification classes she's running this summer, Alissa Cohen paused in her busy day to share her insights into the raw, living foods lifestyle. 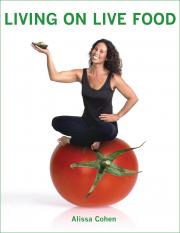 Alissa first shared how she learned about the amazing healing benefits of eating raw, living foods.

How Did You Get Started in Raw and Living Foods?

I've always been interested in holistic health and eating healthy foods. By age 16, I was already eating a vegetarian diet and exercising. But at age 19, I was diagnosed with Candida Albicans. I felt awful and went from doctor to doctor until I received a diagnosis. I was so into health, and I thought I was healthy. But I was really struggling with Candida and later, fibromyalgia. The fibromyalgia was so bad, I couldn't drive my car for more than 20 minutes at a time without being in lots of pain.

Around that time, I walked into a health food store and I met this lady who had a little sewing office downstairs from the health food store. I got a job at the health food store, and so I saw the lady and her child frequently, and I was amazed at how healthy her little one was. Her child ate only 100% raw foods, and never had ear infections, colds, or other things we just assume children catch. I saw how amazingly healthy this child was and I thought, "There's something to this!"

So I started experimenting with my own diet and I began eating only raw, living foods. After just a few days eating this way, I felt like a new person. After 30 days, all the aches and pains went away and I had so much energy. I couldn't believe it.

Did You Eat Only Raw Foods After That?

Not yet. I continued to experiment with my diet. You see, I just couldn't believe that raw foods could make me feel so good. I was a little mad, to tell you the truth. I kept thinking, "Why didn't anyone tell me about this? Why didn't the doctors and all the other people I saw for help know about this?" You've got to remember that back then, practically no one knew about raw and living foods. There was so little information about it.

I really didn't know what I was doing. At first I'd eat only raw foods, but I didn't know how to make raw food dishes, so I'd eat just salads or fruit. Then I'd be starving and I'd fall off the wagon and feel sick again! Finally, when I made it to 30 days on only raw and living foods, all those aches and pains just went away. It was actually shocking - I felt so much better.

How Did You Start as a Raw Food Teacher?

I didn't set out to become a raw food expert or teacher. I was just so amazed at the changes in my own body that I wanted to share the information with others. I opened my own health food store, and people asked me what I was doing to feel so good. So I just told them, and soon they referred friends to me. Many times I had people walking in to see me who were really seriously ill and had reached the end of their rope - they didn't know what else to do. Many of those people that I helped said, "Alissa, you've got to write a book." So I did! My book, Living on Live Foods, was part desperation, part creation. I had to make up my own recipes because I was starving all the time, and I knew I didn't want to go back to cooked foods. I wrote the book, it was published, and it just skyrocketed!

How Did You Go From Book to Teaching and a Restaurant?

The book was a huge success, but I knew that people needed to taste raw foods to be convinced. I started dreaming about opening a restaurant. I grew up in the restaurant business and my husband has owned restaurants and worked in the business. I had it in the back of my mind all along but the time was never right. One day, we were walking along a street in Boston and I saw this little space, and I said, "That's it!" Soon we had the lease and Grezzo was born!

Next, we asked Alissa Cohen for specific advice on starting to eat a raw and living food diet.

Do You Have Recommendations for People Changing to a Raw Food Diet?

I know that some people do a cleanse first and others recommend a gradual transition. I'm one of those people who have to just make a clean break, and I've found through my own trial and error that 100% raw from the start makes it easier, so that is what I recommend. I ask people to give it 30 days; eat only raw, living foods for 30 days, and see what happens. People are amazed at the changes in just 30 days. Weight melts off, aches and pains go away, and they find that the cravings disappear.

I think that if you go only go 50, 60 or whatever percent raw, anything short of going 100% raw makes it harder to gauge your changes. Sometimes it's just easier to go cold turkey, so to speak. Then you can really feel the difference.

Do You Recommend Certain Meals?

No - for me, as long as the food is raw and living, it's fine. I encourage people to eat what they want, and as much as they want at meals. There's no more counting calories or fat, and you don't have to worry about portions. People start eating a raw food diet and sometimes they get this Spartan mentality. They throw out everything in their kitchen and they're left with a big bowl of fruit and nothing else to eat. Then they go off the wagon and stop eating raw foods because they're starving! You need to give yourself a break when you begin. There's a learning curve. Most people didn't grow up eating this way, and you need to learn a whole new way of thinking, from shopping to preparing meals.

Wow, there are so many on my website, and I've known some fabulous people with weight loss success stories on a raw and living foods diet. It really is a powerful way of eating if you want to lose weight. When you're overweight, you may actually be starving to death - you're eating huge amounts of food. But then you crave more, because your body craves foods with nutrients. With raw foods you don't need to eat as much to get the same nutrition. You can eat so much less food but it is more dense in nutrition. You eat less.

My friend Christine lost 120 on raw foods in five months. She's the type of person who was very into health - she knew what to do and she'd probably been on every single diet. But she'd starve herself all day until dinner, then binge at night because she was so hungry. It set up a bad cycle. She was afraid to eat but then she would get so hungry she would binge. She had to find foods that would give her nutrition without putting on weight.

I said to her, "Let me make your food for you for two weeks. You buy the food and I will make it." After a few days, she called me and said, "You're making too much food." And I told her, "Eat it, it's good for you!" I'd deliver meals and lots of raw food desserts to her doorstep. After two weeks, she lost 18 pounds. She was hooked. She ate only raw and living foods after that and lost 120 pounds.

Generally speaking, I think there are two reasons people fall off the raw food wagon. They start eating this way but they're not prepared. They might not have the right foods in the house, so they get really hungry. Then they shop or rush out to find food when they're hungry and they give in to cravings or just eat the first thing they see. You've got to learn new recipes and be open to exploring new ways of preparing food.The second problem or challenge I see is actually a mental or perhaps spiritual challenge. This is hard for people to understand, but what happens when you eat raw, living foods, is that suddenly you have more energy. Everything becomes clearer, and your mind focuses better. Things that aren't working in your life become very apparent. People numb themselves with food just like people numb themselves with alcohol and drugs. When you stop eating to squash your feelings, things come up - and many people don't know how to handle this.

How Long Does It Take for Cravings to Go Away?

That really depends on the individual. Some people find that after a month eating 100% raw, their cravings are gone. For others, a whiff of something cooking might bring back a craving. The funny thing is, if you taste the food you're craving, chances are it won't taste good anymore. Your taste buds really do change. It's really dealing with the memories and emotions that takes time. People need to be patient with themselves.

What One Thing Can You Say to a Skeptic to Convince Them to Try Raw Foods?

If I told you you'd never have to count calories, fat grams or whatever, that you could eat whatever or whenever you want, eat banana cream pie for breakfast, enchiladas for dinner and a chocolate desert…and you'd feel better than you ever felt in your whole life - nobody has ever said "No" to that challenge!You have to make raw foods fun and joyful. Don't white knuckle this. If you're not having fun, you won't stick with it. So have fun, explore, see what's out there. Enjoy the process. You'll start eating lighter and lighter and you'll know how to live on this diet.