Rip Esselstyn is a professional athlete turned firefighter. Responding to emergencies is nothing new to him and when the high cholesterol and other health risks of his fellow Engine 2 firefighters in Austin, Texas, came to light, he responded with a way to fight it. Rip's program helped his fellow firefighters lose weight (some more than 20 pounds), and lowered their cholesterol. Rip's book outlines details this proven diet plan. By following Rip's expert guidance and coaching, you'll transform your body and lifestyle in a month. His plant-powered eating plan is not a fad but based on whole foods, including vegetables, whole grains, fruit, legumes, seeds and nuts.

Rip, your book starts out with a terrifying experience for you as a firefighter, where you dragged a friend out of a raging fire. Later in the book, you compare this to helping your readers change their eating. How do they compare?

Nobody wants to get burned up in a fire and die that way. The story was meant to be an attention grabber. As firefighters we can go in and save people's lives if we're lucky. My goal in writing the book and that analogy is that if I can pull people away from meat and dairy and refined foods, it's the same as pulling them from a fire. Look at the stats right now. Fifty-one percent of Americans are dying of cardiovascular disease. I can't tell you how many wonderful emails I receive daily. I'm saving people's lives without having to wear my fire boots. 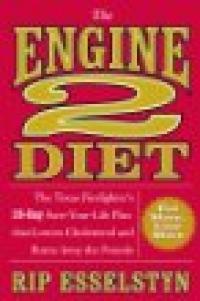 What are the basics for the Engine 2 Diet?

The Engine 2 Diet is a 28 day transformation from the inside out. Every diet program out there misses the mark. Yes, on a cellular level people may be losing weight but they aren't gaining health or losing weight in a way that is sustainable and permanent. The basic tenets are so simple. The four food groups are going to be vegetables, fruits, whole grains and legumes, supplemented with exercise three to five times a week and resistance training two times a week even if for only ten minutes. It's a holistic approach to excellent health, taking people from nutritional extravaganza to nutritional excellence. It's a really solid lifestyle habit. Even though I bill this as a 28 day plan, that's the hook, my bet is that you will do it for the rest of your life. My goal is to get you to eat better than before, or become more plant strong from nutrient dense whole food sources.

The Engine 2 Diet is a four week plan. What kind of benefits can people expect in just four weeks?

It is absolutely phenomenal what the human body can do in just four weeks. With my studies on close to 300 people, I can tell you that:

I'm going to be blunt here. You have arteries going to your genitalia too. Men who follow the Engine 2 Diet will experience rock hard erections. The smallest arteries in men go to the penis.

Often when people consider going on a vegetarian or vegan diet, they are concerned about getting enough protein. Your diet cuts out all meat and dairy so how do people get protein?

It's important to know that there is no such thing as protein deficiency if you're eating enough calories. If you look at the largest animals on the planet they get all the protein they need by eating green leafy vegetables. I talk about this in the book. Mother's breast milk is 5% protein. We as human beings can only use about 12 percent of our calories from protein. It's the one maco nutrient we cannot store. It's a non-issue as long as you're eating enough calories.

Women often complain their husbands are not willing to change their diet. How did you tackle changing the minds of the men in the firehouse?

I set a really solid example. I whipped up on everyone in endurance and body strength contests. The proof is in the pudding when nobody can keep up with you. They sense that maybe they need to stop eating the meat. I don't belittle them or try to sway them verbally unless they ask. Men just need to be educated. Real men eat plants, boys eat meat. Once they realize that if they keep eating the meat they'll get impotent and heart disease, they'll make the change. I really believe that within five years, there will be the same stigma attached to eating meat and dairy as there is to smoking cigarettes today; knowing that it is killing you.

The challenge of any diet is learning to continue on the right road when the diet is finished. After the four weeks are up, what do those who follow the Engine 2 Diet do to continue their healthy benefits?

Well, I can tell you it is really helpful if you can align yourself with other like-minded people. If you can do that, you have a great support network. This society will try to bring you down so fast and so hard. That's one thing that's great about doing it at the firehouse. We are all aligned.

My hope is that when you do this for 28 days you'll look good, feel great, see an amazing drop in your cholesterol and you'll be so motivated you won't want to go back to eating the other foods. Some people will have a little bit of a backslide but nothing compared to what they were doing before.

LoveToKnow Vegetarian thanks Rip for stopping by to tell us about the Engine 2 Diet.