Soy milk estrogen has been a matter of concern for consumers. The estrogen hormones contained within soy foods have been the subject of an ongoing scientific debate for years. Some research suggests the isoflavones. a class of plant estrogens contained within soybeans, are beneficial for consumer health. Opposing studies imply that isoflavones could be harmful and produce negative effects on the human body. In particular, the issues of both soy foods and isoflavones are with breast cancer risks in women. With continuing contradictory claims, vegetarians and soy-lovers everywhere are wondering if soy milk estrogen is safe.

Genistein is one of the chief isoflavones under scrutiny in the soy estrogen dispute. There have been numerous studies assessing the impact that supplemental genistein has on breast tissue. As a highly active hormone, some research has connected genistein with increased risks of breast cancer and breast cancer recurrence. The theory is that this plant hormone may activate estrogen receptor cells within human tissue, including but not limited to, breast cancer cells.

In a scientific article for the University of Illinois news bureau entitled "Soy Estrogens and Breast Cancer: Researcher Offers Overview", Diana Yates reviews some concerns of William Helferich, professor of food science and human nutrition. Having studied isoflavones such as genistein for over ten years, he observed that feeding female rats genistein before puberty actually decreased their risks of mammary cancer. After puberty, however, the animals' likelihood of being affected by genistein consumption posed a greater chance of stimulating estrogen-responsive tumors. Still, these results involved the separated chemical components of what is usually consumed as a whole food. Helferich questions the use of genistein as a form of hormone replacement therapy claiming, "Women are participating in an ongoing experiment with an unknown outcome."

Mark Messina, Ph.D. offers a counter argument regarding usage of soy isoflavones. In his article, Soy Isoflavone Intake and the Risk of Breast and Endometrial Cancers he questions which of the animal models offered in the University of Illinois research appropriately replicates the biological status of both premenopausal and postmenopausal women. He explains that the lack of a decisive outcome leaves the matter of soy isoflavones and breast cancer risk in an area of considerable debate. Soy products, therefore, remain innocent until proven guilty. 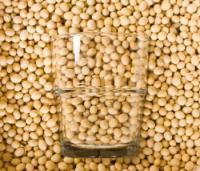 Accredited with numerous benefits to human health, soy milk is often a steeple in the vegetarian diet. In particular, soy milk is claimed to lower blood cholesterol, provide omega-6 and omega-3 fatty acids, and offer healthy protein low in saturated fats. It's said to be a favorable food for reducing the risk of coronary heart disease. On the other hand, the question of how soy isoflavones function in the body with regards to weight loss has developed as a recent area of discussion. Pros and cons are continuing to arise over soy products. With all this controversy, vegetarians can only hope the ongoing research of soy estrogen within the medical community will produce encouraging conclusions. For more information on soy and the effects of soy, visit some of the following links: