For people that don't use animal products, a vegan egg substitute is practically essential when they want to make any type of baked goods. Fortunately, there are several products they can use without having to compromise on taste, consistency or their beliefs. People who aren't vegan but are watching their fat and cholesterol can also benefit from these solutions.

The vegan egg substitute a person should use depends on the recipe he or she is making. This is because eggs can be used for several different purposes. In the lists below, each substitution is the equivalent of one egg.

In these and similar relatively dense desserts, eggs serve as binding agents, keeping the batter together while it cooks to keep the items from falling apart. Other foods that can serve the same purpose are:

These substitutes can also be used to bind together veggie burgers and vegan meatloaf. 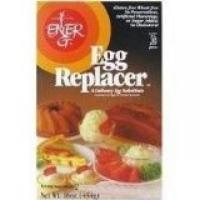 For Breads and Cakes

When eggs are used in bread or cake recipes, they serve as leavening agents, helping foods rise and maintain a light and airy texture. Vegan foods that can help with this task are:

When making a savory dish, people want their egg substitutes to taste like eggs. For example, if someone makes a casserole substituting applesauce instead of the eggs, it will taste fairly bad. Since this is the case, it's important to use substitutes as close in taste and texture to real eggs as possible. Some to consider are:

Tofu will work best in recipes that have eggs as the main ingredient, such as quiches. Ener-G egg substitute is also a good choice here.

What Is Not a Vegan Egg Substitute

Some people, when trying to accommodate vegans, substitute eggs with the following ingredients they think are vegan but are actually far from it:

It's important to experiment with vegan egg substitutes to see which ones work best with what you're trying to cook. Just because one works perfectly with a particular recipe doesn't mean it won't fall flat with another. When you're first starting to cook vegan style, you may want to stick to recipes that are already vegan instead of altering others. That way you'll know they are tried and true, and it won't be quite so touch and go.