What is kombucha? Perhaps you've heard about this strange and wonderful remedy, or maybe you've seen it growing in someone's kitchen. Look no further - all the information you need is right here.

Exactly What Is Kombucha?

The term kombucha refers to two different things: the fizzy, vinegary beverage, and the culture that produces it. Many people are unaware that kombucha is an actual living, breathing thing, or rather a colony of them. How does it work? Once you acquire a living starter culture, usually from a friend or place of business, you periodically "feed" your kombucha a combination of sugar and black tea. The kombucha then works to ferment this mixture, turning it into a brown probiotic liquid that is supposed to have healing properties.

The Biology of Kombucha

The kombucha culture is a symbiotic combination of yeast and bacteria that form together in the shape of an off white pancake. In case you're curious, here are the living organisms that make up the kombucha culture:

Many people are under the assumption that a kombucha culture is a mushroom, which it is not. Despite this fact, it is still referred to as the "Russian Tea Mushroom" and "Manchurian Mushroom."

The liquid that the kombucha produces is a highly potent health drink that is high in enzymes, amino acids, and good bacteria. While the FDA has made no claims about whether or not the kombucha drink has any real healing properties, civilizations have been drinking it for hundreds of years and swear by its ability to detoxify the liver and treat a variety of ailments such as acid reflux and other digestive problems.

The History of Kombucha

Kombucha has been around for thousands of years in China, where it is known to balance qi, aid in digestion and promote overall systemic healing. The culture later made its way to Eastern Europe, Japan, and Korea, where it apparently received its name: Kombu, for the name of the man who prescribed it, and cha, which means 'tea'. 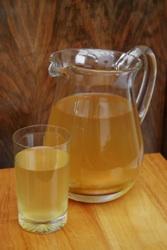 While drinking kombucha may indeed make you feel good, it is not without its dangers. While there has been no conclusive scientific data one way or the other, those taking medications or who have severe health problems should consult a naturopathic doctor or other health care professional before consuming kombucha.

Many cultures claim the kombucha is a cure-all. While there is no scientific evidence of this, millions of people have experienced positive effects from drinking the liquid that's produced by the kombucha culture. The drink, which the Chinese claim contains a fifth taste, has a natural carbonation and brisk, tart taste that is similar to mild apple cider vinegar.

While the taste is prohibitive to some, it tends to grow on people who drink it regularly. This beverage has become so popular that there is now a growing commercial market for flavored kombucha juice, which can be found in health food stores and large-chain grocery stores.

The health benefits of drinking kombucha are:

Still asking yourself "what is kombucha?" Here are some more links to aid in your research:

Comments
© 2006-2021 LoveToKnow, Corp., except where otherwise noted. All Rights Reserved.
What Is Kombucha? Everything You Need to Know