Tracking down the best vegan oatmeal raisin cookie recipe can turn into a lifetime quest, but it doesn't have to be so taxing. If you have an idea of which egg substitutes work best for cookies and the flavor of a butter substitute you like most, you're well on your way to finding or crafting that elusive recipe.

Oatmeal raisin cookies have earned a reputation as a healthy dessert, but the truth is they can be stuffed just as full of fat and calories as the more popular chocolate-chip or sugar cookies. Pinning them down as healthy fare also downplays their fantastic taste. The best vegan oatmeal raisin cookie recipe yields cookies that not too sweet, crisp on the outside but chewy on the inside, with plump raisins and an appealing hint of cinnamon. It's tough to satisfy all of those criteria, but give the following recipe a try and then tweak ingredient amounts or substitutes to your liking.

The below recipe is based on a version from VeganYumYum and makes a batch of about three dozen medium-sized cookies.

If the above recipe doesn't fulfill your cookie quest, try the following alternatives: 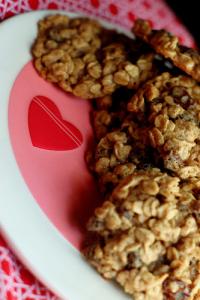 You can also use the above recipe as a base and try adding a couple of extra touches to give the batch some flair and make it your own. Stir in:

Finally, make sure to have a tall, cool glass of soy milk or other non-dairy milk on hand so you can enjoy a cookie right out of the oven!