Although "vegetable soup" seems to imply a dish that has no meat-based ingredients, that isn't always the case, and totally vegetarian vegetable soup can actually be quite hard to find. Even soups with no pieces of meat in them are often made with meat-based broths or bouillon, which can complicate things for vegetarians and vegans.

Unless you go to an entirely vegetarian restaurant, it's never safe to assume a veggie variety of soup has no meat ingredients unless you confirm that with the server or cook. Soups made with vegetable broth or vegetable bouillon bases are rare. Some chefs don't use them because they feel those ingredients don't provide as strong or rich a flavor as meat-based items.

For those reasons, plenty of people who follow a plant-based diet need to rely on homemade batches of soup to ensure all ingredients are suitable for them. Starting with a solid vegetable broth recipe is a great way to create a foundation for most soups.

The below recipe makes about two quarts of broth. 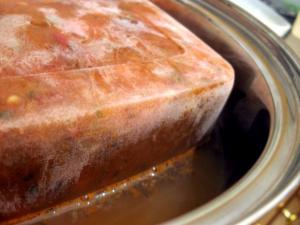 Soup is one of the easiest meals to freeze and reheat.

Although commercial varieties of vegetable stock are available at almost every grocery store, homemade stock has a richer taste, makes a greater quantity and is cheaper to produce. It's also much lower in sodium than commercial stocks.

After preparing an entirely vegetarian stock, you can use the result to make any type of plant-based soup, stew, or curry. Frozen cubes of vegetable stock also work well to thin out sauces and stews that need extra flavor.

When making your own soup, it's easy to toss in favorite ingredients and improvise as you go along. Consider adding the following to veggie broth:

Each of these recipes starts with the vegetable broth above and makes truly delicious soups.

This soup is perfect for a fall or winter dinner. The recipe serves 4.

This hearty soup is filled with delicious vegetables, beans, and pasta. It serves six.

The recipe also calls for Yukon gold potatoes, which add a delicious buttery flavor to the soup. You can substitute with any other potato, such as white or russet if you wish. The recipe serves 6.

Vegetable soup is the perfect dish to enjoy on a chilly day or when you're feeling under the weather, so don't skip it just because you have trouble finding plant-based broths. Make your own broth, and enjoy a steaming bowl full of the delicious, soothing results.